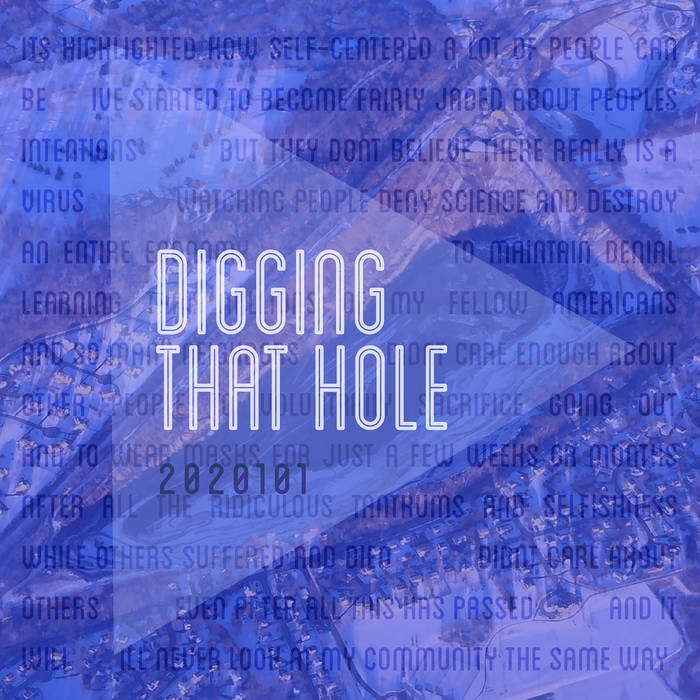 Newton’s third law says that for every action, there is an equal and opposite reaction. The ancient principle of yin and yang is that all things exist as inseparable and contradictory opposites. And in a similar spirit, the theme of this next song exists in a somewhat painful contrast to the unbridled celebration of the previous song we released for this project.

In the stories we collected while researching for 2020101, people shared with us the confounding and gut-wrenching experience of watching neighbors, fellow citizens, and sometimes even friends or family members become invested in narratives that were not based in facts or supported by science — narratives driven by certain media institutions and people in positions of power, all of whom stood to benefit from sowing chaos and division among us.

It’s one thing when a person buys into, believes, and acts upon a lie for which the outcome affects only them. But one of the things that was highlighted for us in 2020 is that our individual actions can have a huge impact on every other person around us — we are inextricably tied to one another, for better and for worse. The consequences of one person’s bad ideas or bad actions don’t necessarily redound only to that person — we all stand to reap the repercussions of the actions of others with whom we share a society.

… often became unwilling to act in support of the broader public good — like when they refused to wear masks in public, or when they rebelled against guidance from public health experts to refrain from gathering with people outside their households;

… or spread dangerous disinformation about the virus being a hoax, or about the development of vaccines;

… and sometimes became wholly invested in conspiracy theories about the origin of the virus, or about the legitimacy of our election, all of which were detached from observable reality.

We were confounded that — when confronted with empirical evidence and material truths that directly challenged those destructive narratives, or upon receiving pleas to consider how their actions were causing suffering in the lives of others — so many of our neighbors, fellow citizens, friends, and family members did not alter their thinking or courses of action, but rather doubled down on the fictions into which they’d invested themselves.

I’ve spent a lot of time trying to figure it out for myself. Because I, too, have been confounded, deeply disappointed, saddened, and angered by this same experience. I try my very best to be a person who is oriented by a compass of compassion and understanding — and from that framework, I really tried to put myself in the shoes of the folks who I saw descending ever more into a realm of alternate reality, to try to figure out WHY.

I wish that I could tell you that I got to a place where I have it figured out. Sadly, I don’t.

But there is one thing that I did learn in my quest for understanding: when a person has in some way attached their own identity to a belief system or a narrative, the potential psychological pain of retracting that belief, or of reevaluating that narrative — which, remember, has been tied up in that person’s own sense of self — is much, much greater than the psychological pain of continuing to exist in a realm defined by its contradiction of observable reality.

Even when entrenchment in that realm stands to harm others around them — whether by contributing to the spread of a potentially deadly virus, or by contributing to the demolition of our democracy — it is often easier for the human psyche to continue living in a lie than to injure its ego by confronting how it has gotten things so, so wrong.

And, given that aversion to psychological pain, if ever a nagging feeling does pop up that maybe they have, indeed, gotten it all wrong, it seems like the readiest remedy that the psyche grabs onto is to dig in even further. It’s a terrible, self-inflicted downward spiral that can lead a person to isolation from relationships, disconnection from reality, and alienation from society. I can’t imagine that’s a happy place to be.

It was heartbreaking and infuriating to watch this phenomenon play out this last year. And it continues to be so, because none of us can control the actions or thinking of another person. We can’t force anyone to be different than they choose to be. We only have the power to change our own thinking and our own actions. And the rest, I guess, is an exercise in acceptance.

So, for me, I’ve arrived at an approach that feels aligned with my own sense of humanity in this moment:

— I will continue to honor and process the grief — and sometimes anger — that I feel over watching people around me dig further and further into those dark and untethered places;
— I will continue to try and cultivate compassion for all people, even them;
— and I will do absolutely whatever is in my power to do to fiercely protect myself and others from being swallowed into the consequences of the harmful beliefs that exist in our society.

I don’t know, I counted on more from you
It’s killing me, you looking out for just you
You’re digging that hole

I don’t know how to get through to you
It’s your denial, but all of us stand to lose
You’re digging that hole