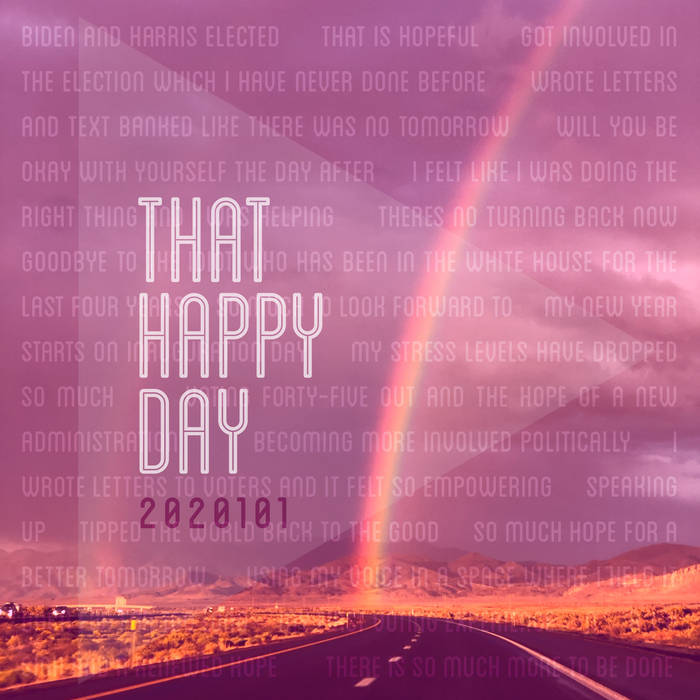 As you may remember from previously in this project, some of the questions we asked in our story collecting were:

We received a lot of very emphatic and enthusiastic (and often quite … how should I say … colorful?) answers to these questions having to do with the outcome of the election on November 3rd.

As one respondent said — which I think captures the essence of most of the responses we received on this topic — there were a lot of “big feelings” surrounding the lead-up to and the aftermath of that event, including having the experience of “a big sigh, and renewed hope.”

Big feelings, for sure.
People shared how the outcome of the election contributed to a major drop in the levels of stress they’d been experiencing.
They talked about how they felt the world “tipping back to the good.”
They expressed feelings of hope for a better tomorrow, and joy in looking forward to what was to come in 2021.

… many people shared about how they found themselves empowered
— often for the first time in their lives —
not merely to hope for the outcome they wanted,
but to get involved in working for the result that they recognized we desperately needed as a country,
and which they ended up getting to celebrate with exuberant relief,
along with millions of others around the nation who also showed up to work for that result.

A celebration that felt sweeter, knowing that they’d been an active part of making it happen.

People told us about how they realized in 2020 that election results were far from guaranteed to work out the way they wanted them to; and that the stakes — for our democracy, and for humanity — were too great to remain on the sidelines and just wait to see what would happen.

So they stepped out on limbs … to volunteer for voter registration efforts.
They worked up the courage … to use their voices in spaces where they had previously held back.
They took themselves out of their comfort zones … to write postcards and letters to people all over the country to get out the vote.
They set aside their nervousness … to join phone and text banks, contacting voters in far-flung states to remind them of when and where they could cast their ballots.
They donated money to campaigns.
And some of them even became first-time voters!

More than in any previous election year, people realized the essential role they have to play as individual citizens of our democracy — that being a government “of the people, by the people, and for the people” is a contract that requires the people — that’s us! — to show up to make it work for us. To make it work as a vessel for creating the kind of world we want to inhabit.

Because … we have also learned (painfully) that when we stay on the sidelines, there are others — whose interests do not include the creation of a society characterized by compassion, justice, and equity for all — who are more than happy to step into the void we create with our absence in the democratic process, and to entrench a system that works only for their own benefit.

Many of us learned this year that we are damn lucky to live in a democracy,
which means that we don’t have to passively accept leaders and systems that don’t align with what is good and right and just.
Rather, we have the power to choose who leads us, and what our priorities are as a nation, to build a society that aims for goodness and justice.

And also that — in the face of active voter suppression movements, and the rise of authoritarianism, which are both still making moves in a big way as I write this — we will only get to keep our democracy as long as we participate in it and fight like hell to keep it.

In 2020, we lived through a big, emotional, living illustration of the notion that the the future isn’t something we will arrive at; it is something that we will create. And hope is not something to be found; it is something to be built. Hopefully we’ll carry this lesson with us and put it into action in the days and years to come, as we fight to hold onto our democracy and make the world better for those who will come after us.

As one of our respondents wrote: “There is so much more to be done.”
More hope to create.
More futures to build.
More spontaneous dancing in the streets to celebrate more happy days.